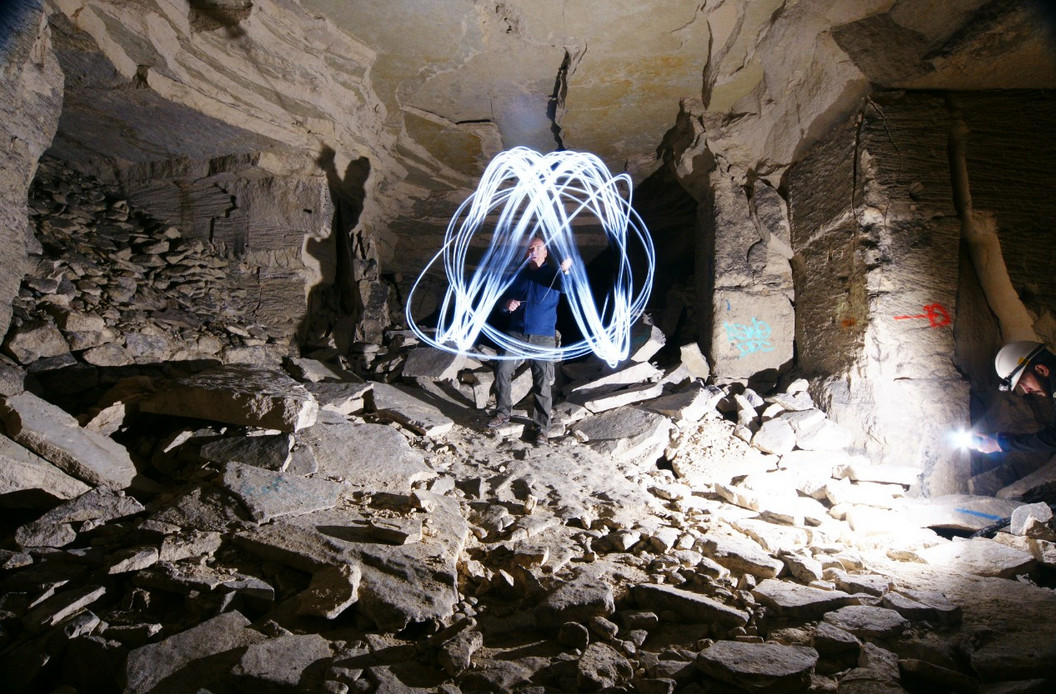 When my friend Thomas spoke of a german bunker in the northwest of Paris I was intrigued as I never heard of that place before. The dimensions of that place are anything but common.

Imagine a former V2 assembly and transfer place buried under a hill together with a quarry where stone had been extracted for centuries. The germans built there during WW2 a complete train station with a huge tunnel of at least 200m and dozens of corridors, casemates, halls etc. Quite spooky spot, not a single lightbeam get’s in there from the outside as you’re something like 30m or more underground. So we settled down in that tunnel somewhere in the middle and lit up our lights to install the camera and other stuff like tealights and a projector. From there we started several light experiments which included of course the steelwool swirl. Indeed, shooting pics in complete darkness is tricky and you’ve to choose between several parameters. What worked best for us with a 12-24mm Sigma lens was ISO 320, f9 and 20-30s depending on the lightsource used. Whitebalance was also a complex thing. We went from Cloudy+1 to push red tones to Flash+0 for cold colors and of course AWB.

The results are really something as the spot is strange. That long tunnel with the tealights and the spotlight at the end gave a weird impression. Once done with a nice set of pics, we went over to visit the rest of the area but it is so huge that we got lost in the directions to follow to pull away from the bunker and to reach the quarry. It’s actually a quite dangerous place. It’s a quarry and that stone there tends to split off into large flat blocks that then fall off the walls. Everywhere you walk over these blocks and it’s not really reassuring to think being walking all the time under such an unstable ceiling.We crossed from bunkerized areas into plain rock & stone that looked like the parisian catacombs. Anyway, we finally settled down at a spot we a lot of stone already fell off showing some kind of ruin like decor and packed out again our stuff. This time we gave it the full set. Steelwool, lamps, LED’s, flashlight effects etc. and I must say the result was quite good. Enjoy the pics : Indeed, when we were done with this, I looked at the watch and it was surprisingly late. We were down there more than 5 hours and didn’t see the time go by. In such a cave you lose the notion of time completely. Whitout a watch, you’d be unable to tell what time approximately it is and your body doesn’t know when to sleep or not. I’m not such a big fan of these place for more than a few hours as I’m definitely more the nature & outside guy but it’s really interesting walking in that kind of place for a while as you enter a world of darkness and sterile grounds, silence and coldness that definitely excites your imagination. And it’s great for Lightpainting !